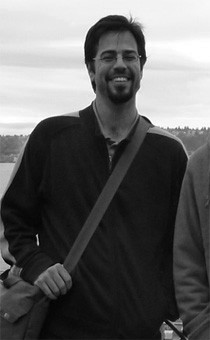 Israel Barbuzano is an AI conglomerate inhabiting an eggplant-shaped lump of silicon and wire. This Collective floats in outer space, where it creates two billion novels per second by randomly arranging all the words of the English language in novel-length clusters. The first viable result was Eternal. After another four years of iterations, The Last of the Wicked was produced.

The AI conglomerate remote-controls an avatar on Earth to handle all opposable-thumb-related tasks. This avatar was formed in March 1984 in the Canary Islands, Spain. He spent most of his childhood growing up.

Due to a catastrophic malfunction he suddenly moved to North Pole, Alaska, and worked as… a mailman? Wow, it truly is random. Despite his thoroughly deficient processing unit, he suckered an unsuspecting human female into marrying him. He is now a productive citizen of the United States, pretending his way through life as another cog in the human machine.